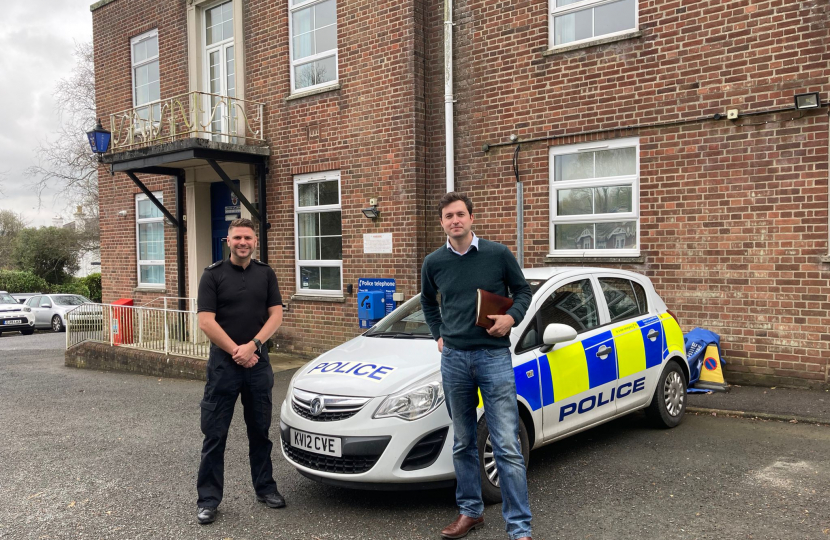 By the end of 2023, South Devon will have more police officers than in 2010. Of the forty-six new officers arriving between January and July of this year, twenty-five are trainee recruits and twenty-one are transferee officers. All of this is to be welcomed and will help to bolster a police presence in both an urban and rural setting.

While South Devon can boast the second-lowest level of crime in the country, we are by no means immune from criminal activity. Anti-social behaviour and drug-related criminal activity are a constant presence and ones that many feel are not being addressed. Over the parliamentary recess, I met with Parish Councils, District Councillors and residents from across South Devon who spoke about the need for greater police visibility, faster response times and an improved 101 service that leads to action.

Each and every account, while told from a different area, was of striking similarity. It is clear that parts of the South West are viewed as a soft touch by criminal gangs and those who wish to make a nuisance of themselves within the community. Such an approach cannot be tolerated and these new officers must be utilised in a manner that restores confidence in the police force while also cutting down criminal activity.

However, it is not just the police who can help to play their part. Local communities can work together and through Commissioner Alison Hernandez’s Councillor Advocate Scheme, help to enhance liaisons between County, District and Parish Councillors and therefore ensure that every village and town has a direct link to the police force. Already Councillors part of this initiative are recognising that improved channels of communication and representation are leading to better intelligence, reporting and action from our officers in blue.

We have hundreds of village halls that sit dormant through the day and night. They are wasted when not used. I am therefore proposing that village halls sign up for a new initiative that sees them serve as ‘Police Hubs’ for officers to stop off at during their tours around our hamlets, villages, and towns. This will provide officers with a pit stop but also a location from which they can base themselves if on a lengthy tour. My proposal was raised to the Minister for Policing, Kit Malthouse MP and already a significant number of Parish Councils have expressed an interest in such a proposal. It is my hope that it would help to improve police visibility as well as deter any would-be criminals.

Of course, being able to report a crime is essential. All too often the ‘101’ number is slow to be answered and reports of incidents go unanswered. Clearly this system needs to be improved but it is also necessary to ensure that each area has a local point of contact within the police force. If we wish to drive down drug crime and anti-social behaviour then we need to ensure the reporting system works and the evidence can be built so that arrests lead to prosecution.

If South Devon can develop these three points, then not only will we have a particularly effective force but we will also be able to hamper those groups and organisations that work across county lines. Devon can play its part in disrupting criminal activity both within the county and across the country.

As ever, there is no one-size-fits-all approach to tackling crime. But through our Police and Crime Commissioner and the new team of officers coming online, there are significant opportunities to eradicate those remaining vestiges of criminal activity that blight our county. We can and must ensure that between rural and urban settings, there are no gaps for criminals to exploit, and that the police continue their hard work to safeguard the community as well as to enhance their reputations.