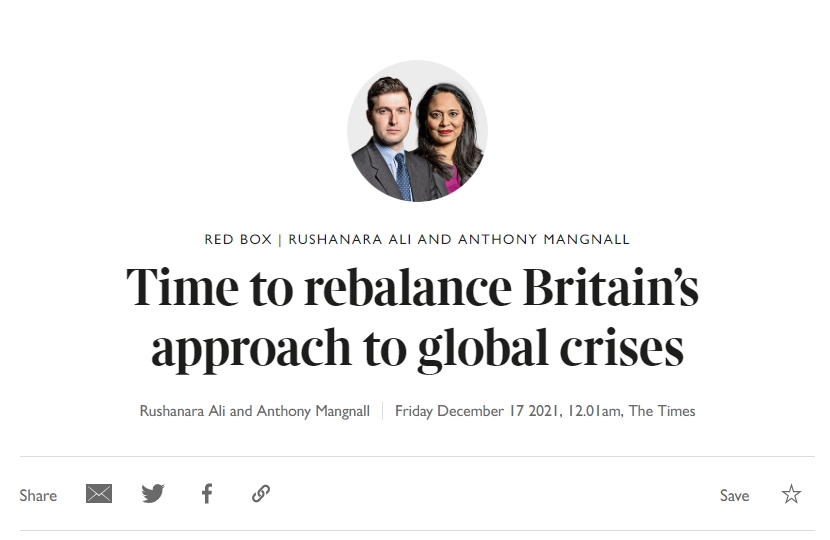 The end of the calendar year is naturally a period of reflection — and hopefully, learning. Last week, the all-party parliamentary group on conflict and global Britain, which we co-chair, shared evidence from some of Britain’s leading NGOs on the government’s response to conflict in 2021. It made for some grim reading.

The first headline was, of course, the UK’s lack of clarity in the departure of Nato from Afghanistan. The withdrawal of international aid there has caused a colossal economic and liquidity crisis. Millions are at risk of starvation, with the freezing winter, Covid-19 and a broken healthcare system exacerbating the crisis. More than five million people have been in protracted displacement driven by conflict across Afghanistan. UNHCR believe that ten0 million children are in need of humanitarian assistance, and the Disasters Emergency Committee predict has estimated that over eight million people are at risk of starvation during the harsh winter.

The Halo Trust told us of children in Kandahar being schooled next to a playground filled with improvised explosive devices. Yet the government has announced there will be no bilateral funding for weapons clearance in Afghanistan this year.

The West’s withdrawal from Afghanistan will have long lasting implications both for the country itself but also the perception of the international community’s ability to respond to conflict and crises. Such a view cannot be allowed to fester and the plurilateral systems that have for so long swung into action must be rejuvenated by strong and reaffirmed domestic policies through coalitions of democracies that adhere to the rules-based order.

Mass displacement caused by conflict was not restricted to Afghanistan of course; it has been on the rise worldwide. UNHCR reported that 80 million people displaced during 2019, nearly seven times higher than in 2001. Myanmar, Ethiopia and Ukraine are all facing encroaching conflict, while the stalemate in Syria has left millions of people displaced and forced to live among deadly explosives. Overall, the number of people living in proximity to conflict has nearly doubled since 2007.

The now indisputable threat of climate change is also exacerbated by war. Some 80 per cent of major armed conflicts between 1950 and 2000 took place directly in biodiversity hotspots that sustain around half the world’s plants and many rare species of animals. And 40 per cent of internal armed conflicts in the last 60 years have been related to natural resources. Meanwhile 12 of the 20 countries most vulnerable and least ready to adapt to climate change are also sites of armed conflict.

The group that we jointly chair was created to ensure that the UK places conflict prevention at the centre of its international strategy at a time when there is a toxic cocktail of global emergencies that includes Covid-19 and climate change. We seek to inform and enhance debate and discussion on the UK’s conflict strategy, as well as helping to shape Global Britain’s ambitions.

Hearing from British NGOs, such as Save the Children, the Halo Trust and War Child who are on the ground in many conflict zones, is therefore essential. Sadly, our eagerness to learn from them does not yet extend to the foreign office: we hope this will change in the year ahead. From conflict resolution to broadening our development budget objectives and reaffirming the international rules-based order, this all-party parliamentary group offers on-the-ground insight and analysis to some of the most protracted and complex issues facing the international community, as well as seeking to steer the UK’s domestic policy in relation to conflict.

The effectiveness of the UK’s involvement in tackling conflict across the world, whether directly or indirectly, is subject to the strength of the UK’s conflict strategy. Without a clear, cross-departmental, integrated strategy that is informed by a rigorous foreign policy, inconsistencies will continue to have devastating consequences.

Recent history shows us that the UK has put too much emphasis on countering traditional threats and an over-reliance on military force when responding to the challenge of conflict. This is also illustrated by the significant mismatch between the ambitions, commitments, and resourcing of the Ministry of Defence and the foreign office. We believe that the conflict directorate now has the opportunity to draw resources and expertise from other departments and NGOs. It must elevate important agendas omitted from the integrated review, such as the protection of civilians, human security and the children in armed conflict agenda. If the directorate accomplishes this next year, perhaps our debrief in 12 months’ time will showcase a more strategic, integrated and indeed, more compassionate global Britain.

Rushanara Ali is a Labour MP; Anthony Magnall is a Conservative MP. They co-chair the all-party parliamentary group for global Britain

Listen to Anthony's appearance on a podcast discussing the Comprehensive and Progressive Agreement on Trans-Pacific Partnership.