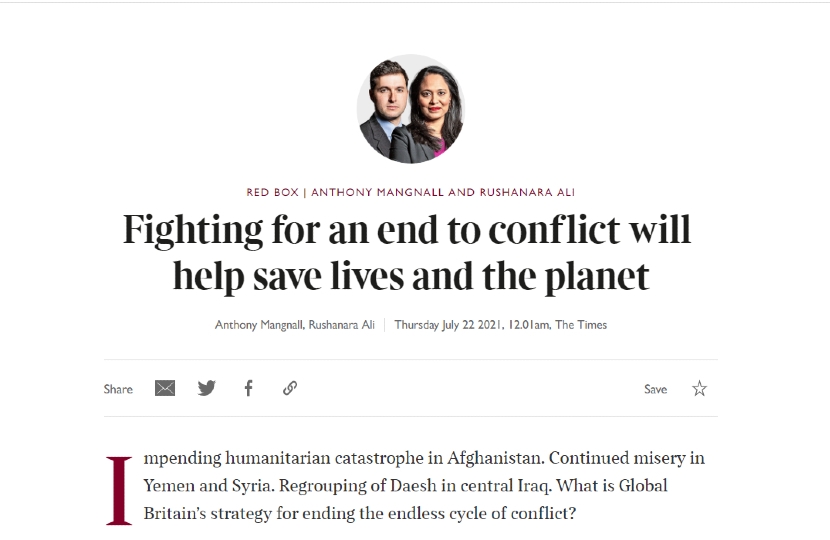 Impending humanitarian catastrophe in Afghanistan. Continued misery in Yemen and Syria. Regrouping of Daesh in central Iraq. What is Global Britain’s strategy for ending the endless cycle of conflict?

It also promised a new age of inclusivity, in which new expert voices could be heard in Whitehall. This includes the new directorate set up by the foreign secretary to deal specifically with Britain’s response to war and conflict.

The UK has some of the best humanitarian non-governmental organisations (NGOs) in the world. They work in some of the most hostile and dangerous places on the planet, removing improvised explosive devices and explosives, educating children and women, and reintegrating ex-combatants and much else.

These NGOs are a vital source of knowledge and experience, gathered from both day-to-day operations in the field and long-term research, often conducted with local partners and universities and other centres of excellence.

Last year, the UK’s leading NGOs were invited to submit views for the Integrated Review to the Cabinet Office, yet according to NGOs we spoke to, none of their submissions were taken on board and it’s unclear whether they even reached the relevant experts in the FCDO.

Now the foreign secretary must ensure that his department’s open door for experts is more than a hollow promise.

Yesterday, we co-chaired the inaugural session of the new All-Party Parliamentary Group on Conflict and Global Britain, which will bring together policy makers, NGOs and foreign affairs and defence experts to provide recommendations to government on what the UK conflict strategy looks like.

We hope there will be greater co-operation, cross-learning and coming together for the greater good.

We have our work cut out. As these experts can attest, violent conflict has increased after decades of relative decline. The number of direct deaths from conflict, displaced populations and terrorist incidents have all surged since the beginning of the century.

The economic impact of violence on the global economy in 2019 was $15 trillion, equivalent to one-tenth of the world’s economic activity, or $1,900 per person. The World Bank estimates that by 2030, up to two-thirds of the world’s extreme poor will live in countries characterised by fragility, conflict and violence.

The UK government’s recent decision to cut the foreign aid budget could not have come at a worse time. It will slash billions from UK aid, which funds programmes that help some of the poorest people, including in fragile and conflict-affected parts of the world.

Leading NGOs are also telling us that conflict is not just a threat to human life but is harmful to all forms of life on our planet. 80 per cent of all major armed conflicts between 1950 and 2000 occurred in biodiversity hotspots that sustain around half the world’s plants and rare species of animals. 40 per cent of internal armed conflicts in the last 60 years have been related to competition for natural resources. Depressingly, 12 of the 20 countries deemed most vulnerable to climate change by the Notre Dame Global Adaptation Initiative country index are also sites of armed conflict.

This is no coincidence. Climate has been shown to be an exacerbating factor in conflicts across the Middle East and North Africa, from Syria to the Sahel.

The UK government must prioritise climate change resilience and help future-proof at-risk countries against the destabilising impacts of climate change. Government priorities need to be aligned along the three Cs that will dominate the next decade: Covid, climate and conflict.

This will require a bolder framework for conflict. The foreign secretary said he wants the UK to be a centre of conflict resolution. But this fails to address the cyclical nature of conflict.

A more comprehensive strategy must seek to prevent conflict where fragility exists and mitigate it when the conditions for conflict ripen. Finally, we must also be more active in assisting in conflict recovery, to prevent the reignition of the whole cycle again.

In the usual spirit of collaboration, a group of NGOs recently formed the Action on Conflict Alliance. Their first-hand expertise should be welcomed by the foreign secretary; they are a key component of Global Britain and manifestation of our soft power.