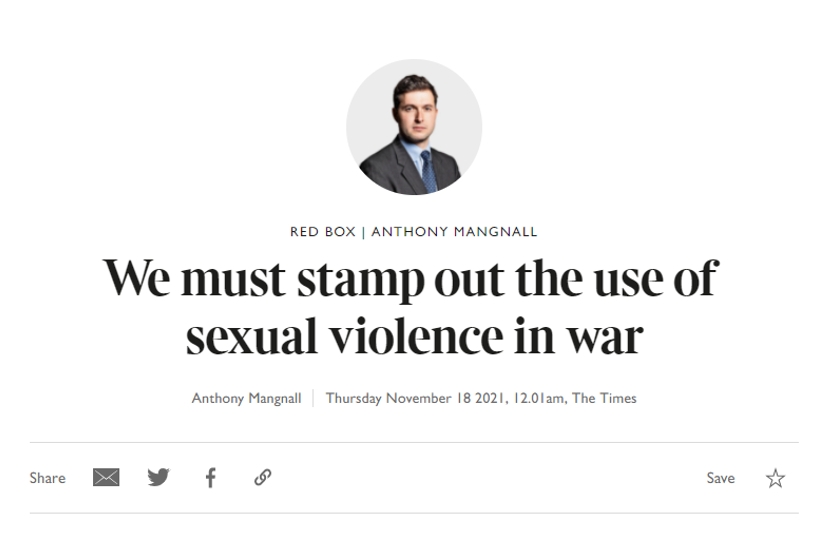 As Chair of the APPG on Preventing Sexual Violence in Conflict, Anthony welcomed the Foreign Secretary's announcement earlier this week that the UK is committed to working with global allies to support the initiative.

Anthony has written an article for The Times on the subject, which can be found here and below.

The desire to enact change on entering a new ministerial department must be palpable. It often happens quickly. Ministers wish to leave their mark, prepare their legacies and ensure their tenure does not pass unremarked. All of which, given the nature, speed and brutality of politics, is perfectly understandable.

However, the cost of this is that the desire for immediate change and action comes at the expense of previous policies and initiatives. Many of which, given the opportunity, could achieve a great deal and do an enormous amount of good.

So, it is with a huge surprise, and indeed appreciation, that the foreign secretary this week has relaunched an existing policy: the Preventing Sexual Violence in Conflict Initiative (PSVI) injecting it oxygen and energy.

In her capacity as both foreign secretary and minister for women and equalities, Liz Truss has doubled down on the work of William Hague and Angelina Jolie and is now seeking to address one of the most heinous and overlooked crimes – that of the use of rape as a weapon of war.

The initiative set up in 2012 was directed towards raising awareness, supporting survivors and garnering international action. It sought to end the culture of impunity and bring perpetrators to justice. Early action was fast and bold and resolutions were passed, summits held and commitments given, but sadly the resolve and determination to act diminished over time.

The foreign secretary is both right and courageous to breathe new life into PSVI. From the commitment to restore the women and girls development budget to tackling child marriage and addressing violence against women head on, shows that global Britain is not shrinking from the international stage but stepping forward to address the most difficult of crimes.

This all should be welcomed and applauded. However, having been at the inception of PSVI to make this truly effective we must go further. The need for a new international body to act as a mechanism that provides, justice, support and evidence is needed now more than ever.

Such a body should be a stand-alone mechanism that supports survivors, documents crimes and brings perpetrators to justice. Sadly, the Hague and the UN have proven themselves ineffectual in addressing the systematic sexual abuse committed against the Tigrayans and Rohingyas, to name but two.

The resolve of the West to act has been severely questioned over the course of the last year. The international landscape appears more fractured and divided than at any other point in recent history. The need to reassert our commitment to human rights and the rules-based order, especially in the wake of Afghanistan and increasing Russian aggression, could scarcely be more necessary or important.

The foreign secretary has demonstrated the wisdom and courage to build on what has come before. Now she has the opportunity not just to strengthen and revive the Foreign, Commonwealth and Development Office but to reshape the international landscape and create new systems that can restore faith in the western world’s determination to act and to help those most in need.

Learn how Anthony is working to raise awareness of the extent of sexual violence in situations of armed conflict, and to rally global action to end it.